The future. It is here. The first demonstration of Battlefield 3 absolutely BLEW MY TINY MIND. This is going to be one hell of a game about shooting things. Impressions, quotes, new shots.

It’s running on a PC the size of a large Alsatian, so it’s perhaps not all that surprising that Battlefield 3 looks so much better than any other FPS I’ve ever seen – but it is still extremely impressive. The videos do a pretty good job of showing off the level of detail, but until you see it running, you can’t quite believe it’s possible. But it is, on this hardware anyway: we’ll have to wait and see what DICE can deliver on current consoles.

You’ll have seen the beginning of the demo in the gameplay trailer EA put out at GDC last month. Beginning in an ATV with three other soldiers partaking in typically gruff, sweary, jarhead banter, we emerge into a middle-Eastern city, all dust and traffic and sun on concrete. This part of the game is set on the border between Iran and Iraq, in an imaginary conflict set in 2014.

The squad is sent to a market to investigate the disappearance of another team of marines. Making their way through narrow, dusty, atmospheric alleyways, they eventually come to a car park near the missing team’s former position – at which point a shot rings out and one of the squad falls to the floor. As the demonstrator drags him behind cover by furiously hammering the S key, insurgents start appearing from behind cars and climbing wire fences.

In the ensuing firefight, it’s impossible not to notice Battlefield 3’s startlingly advanced sound design. Guns really sound like guns, the shots echoing differently indoors and out in wide open space. Even the explosions sound detailed.

An exploding car heralds the presence of two RPG-wielding enemies on a second-floor balcony overlooking the carpark. They’re swiftly despatched with thrown grenades whilst the rest of the squad takes care of targets on the ground, keeping tight behind cover. In a matter of a minute or two, it’s all quiet again, and the demo skips ahead to an underground basement.

Having found an ominous wire leading from upstairs, we’re sent to investigate it alone. Following the wire into a storage area, a tell-tale beeping emanates from somewhere up ahead – our demonstrator turns to find an IED hooked up to two red wires.

After disconnecting one of them, the beeping starts to escalate alarmingly in tempo. Suddenly, someone grabs him from behind. There’s a frantic, close-quarters QTE fist-fight using the mouse buttons as our demonstrator tries to beat the young assailant off and disconnect the other wire, pinning the guy up against the wall, slamming his head against it until he eventually loses consciousness. He yanks the second wire out as the beeping reaches fever pitch.

We skip forward again to the rooftop of the same building, where a sniper fires a shot from a building somewhere off to the right. Going prone, the whole squad creeps across the roof, looking for a good defensive position.

“You don’t want to be one-dimensional, always running and gunning.”

Every five or ten seconds, a sniper shot chips a hole in the low wall, sending bits of rubble bouncing across the rooftop, or hits the ground uncomfortably close to a teammate’s prone body. Eventually, our demonstrator reaches position and fires an RPG at the hotel opposite, under suppressing fire from the other squad members – and practically the whole building blows up, neon sign, balconies and all. “Good effect on target,” says one teammate, which seems a bit of an understatement.

Battlefield 3 already seems to have an excellent feel for the rhythm and tempo of a good single-player shooter, interspersing the chaos and destruction with minutes of quiet tension. Brand manager Kevin O’Leary considers this one of Battlefield’s key differentiators in the single-player campaign.

“In that demo we saw a one-on-one fight, and then outside there can be hundreds of people and vehicles, all-out war,” he says. “But you don’t want to be one-dimensional, always running and gunning. I didn’t fire a bullet for the first five minutes of that demonstration. It’s about highs and lows, so you can really feel the battle.”

The last part of the demo is set out on a wide road, as the squad tries to hold back waves of attackers from a narrow overpass with helicopter support – the noise of gunfire, helicopters and enemy vehicles is overwhelming. There’s a tinkling sound, oddly clear over the cacophony of gunfire – our demonstrator looks up, and sees a shimmering stream of spent bullet cases showering down from the helicopter above.

After the road is cleared of enemies, there are a few moments of calm, which predictably doesn’t last long. The demo ends as a massive earthquake ruptures the ground and a huge ripple of cracked tarmac sends the soldier flying from his mounted gun, as building all around begin a slow, inevitable collapse.

The cityscape is an extremely good place to show off the Frostbite 2’s unmatched capabilities when it comes to destruction – it’s easy to see why EA has chosen this level as our first taste of the game, and it whets the appetite for what will happen later in Paris and London. It’s all extremely scripted, of course, but that’s to be expected from a reveal demonstration.

“It is different every time – it may be slight, but you can choose how you do things. I’ve played this like 150 times; it’s always a bit different,” laughs Kevin.

It feels strange that our first look at Battlefield 3 features no vehicles and no multiplayer – the two things upon which the series built its name. But O’Leary assures us that vehicular combat will be a big part of the single-player game.

“It’s Battlefield, they’re always going to be there,” he says.

“Obviously what we just showed didn’t have any driveable vehicles. Jets are back, so there’s most likely going to be jet elements, and we always like to mix it in. You’ve got to have a good mix of infantry and vehicles.”

As for multiplayer, DICE won’t be talking about that until E3, although it has confirmed it’ll feature 64 players on the PC. The beginning of June would be a very good time to keep an ear out for more info. 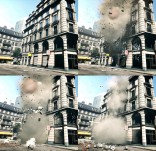