Two years after Arkham Asylum swung in to save the day from not-so-super superhero games, can lightning strike twice? We spoke with Rocksteady marketing game manager Dax Ginn to find out.

The sequel to the critically acclaimed Batman: Arkham Asylum.

Launching on October 18 in NA territories and October 21 EU.

An insane clown (no posse, thankfully), a mutant plant woman, a roided up freak, and Batman walked into a prison, right? And – in a world full of mediocre licensed games – here’s the punchline: it was actually good. One of the best games of 2009, in fact. Even early on, Arkham Asylum showed plenty of promise, but it was understandably difficult for gamers to muster anything more than cautious optimism when they existed in the same reality as Superman 64. And so, Arkham Asylum – fittingly, considering the subject matter – took everyone by surprise, presenting a blend of hard-hitting action, gadgetry, and stealth that catapulted it not only to the top of the superhero heap, but into the upper echelon of games in general. Finally, in the world of licensed games, justice prevailed. The exploitative cash-in mentality of old had been thoroughly thwarted.

After such groundbreaking success, many would be content to rest on their laurels – to throw down an anchor and keep things, well, steady. Contrary to its name, however, that’s not Rocksteady’s way. The developer has a few more tricks up its utility belt, and it’s certainly not afraid to shake things up. So say goodbye to the asylum’s safe, closed-off confines, because Arkham City’s a beast of an entirely different nature.

Bat in the big city

The demo we saw began with Catwoman in serious danger of losing all nine lives at the hands of Two-Face, who was hoping to cement his reputation as top dog of his new turf. As soon as the camera shifted over to Batman perched atop a skyscraping rooftop, however, we saw the real star of the show: the city. All at once gothically gorgeous, sprawling, and – most importantly – completely open, it was an absolute sight. And, according to marketing game manager Dax Ginn, it’s not just a pretty face either. Arkham City has personality to match.

“There’s two things that we’re really focusing on. Firstly, the game world itself in Arkham City is a huge undertaking for us. A lot of character and a lot of personality comes through that. And we want to treat the city like a character in itself. You know, it changes. It evolves throughout the game experience,” he told us.

“Each of the villains that have been thrown into Arkham City have carved out territory for themselves, but that territory is never static or guaranteed. There’s a simmering turf war that’s going on between Two-Face and his thugs and Joker and his thugs – as well as Hugo Strange, who runs the entire thing.”

“We want to treat the city like a character in itself.”

“If you move into Joker’s territory, you get a very Joker-ized experience, and all the artwork on the buildings – whether that’s graffiti, signage, or whatever it might be – gives you a dense kind of Joker experience,” he explained. “So our art team has really put a lot of effort in making that sort of transition between one turf zone to another – really helping the player feel like they’re making a physical transition into another emotional space.”

He wasn’t just spewing hot air, either. As soon as Batman took to the skies via a revamped flight mechanic, we were able to glimpse multiple city segments, each of which glistened in the pitch black night with their own characteristic flavors. Time, however, wasn’t exactly on Catwoman’s side, so our demonstrator was quickly forced to take stop the sightseeing and get down to business.

Our demonstrator then flipped on the new, allegedly improved detective mode in order to flush out a potential informant. A familiar darkly colored hue then enveloped the whole screen as Batman soared over a crowd of thugs – not exactly putting to rest our fears that detective mode will shove the game’s gorgeous art out of the spotlight again. On the other hand, however, Rocksteady’s attempting to tone down detective mode’s all-purpose nature so as to keep Batman from essentially wearing his sunglasses inside.

“There was a lot of opportunity to exploit detective mode,” Ginn admitted. “It kind of felt like it wasn’t really right for Batman – like we were kind of overdoing it. For us [in Arkham City], it was just a balance between the advantages that you get from detective mode and the advantages that you get from being normal view. So we’ve addressed those concerns and adjusted that balance of what detective mode gives you, so that if there’s a situation requiring it, you use it for that. You don’t just leave it on. We’ve been focus-testing that a lot, and we’ve found that people are using it as a tool rather than just the default way to view things.”

Even so, Batman was able to pinpoint hapless baddies’ locations from a hundred or so feet in the air – a new technique that doesn’t exactly strike us as toned down. What happened next, however, pretty much forced us to put a lid on the skepticism and emit only a single word: “wow.” Our demonstrator locked on to an enemy and then dove straight at him – out of the air, mind you – in a tackle that was less linebacker and more entire 27-car freight train. Poor bastard never knew what him – though we have to imagine he was aware of the inherent risks when he took the job.

What happened next forced us to put a lid on the skepticism and emit only a single word: “wow.”

Using detective mode, Batman then had to avoid beating the informant into a bloody pulp while also pulverizing his buddies until they were down for the count. Fortunately, Batman now has twice the number of combat animations at his disposal, including a number of acrobatic avoidance techniques – perfect for flipping right over the informant and sticking the landing on some other guy’s face. Speaking of, many of the new animations we saw were positively brutal. For instance, we witnessed Batman snap a guy’s leg like it was made out of rotting twigs and hope (though not enough, evidently), and also catch a chair thrown at his head and toss it right back. Unsurprisingly, the informant nearly wet himself telling Batman everything he wanted to know, and then we were on our way.

After a similarly quick scuffle that sent Two-Face and his thugs fleeing in barely concealed terror, Batman rescued Catwoman from her oddly Adam-West-appropriate predicament: dangling over a vat of corrosive green goop. And then the Joker tried to snipe her. Yeah, really not her day. That, however, gave our demonstrator the opportunity to show off Batman’s new investigative tools, which allowed him to detach the camera from Batman entirely in order to scan the area for clues. Before long, he determined the trajectory of Joker’s bullet and was hot on his sickly nemesis’ trail.

Inside the Joker’s alleged lair, we found Harley Quinn and – perhaps more importantly – a gang of thugs armed with automatic rifles. With Batman seemingly at their mercy, our demonstrator took the opportunity to show off the sheer volume of dialog that’s been recorded for enemies this time around. That, of course, is key, since freaked out baddies tended to start sounding like broken records in Arkham Asylum. Here, however, they went on without missing a beat for a solid couple minutes – something of which Rocksteady is quite proud.

“First and foremost, we’re listening to the fans of Arkham Asylum.”

“We’ve recorded a poop-ton of dialog,” Ginn told us. “You know, trying to really express emotion from thugs who are going from that initial bravado and confidence to really starting to brick it and lose it. Getting that across and maintaining a robust system where the player can do whatever they want in any order and have that all hang together just requires a load of dialog.”

“You can never have enough of that sort of stuff. You can never have too much – whether it’s emotes or throw-away lines or comments from thugs within the game. But there is a finite limit to that, so invariably you need to set up systems where it’s better than saying nothing. If it means saying a line that they’ve said before, then that’s the way that it goes. But we try to avoid that as much as possible, because we feel the same thing. It does break the sense of believability when you’ve heard a line delivered in exactly the same way. That is the reality of a situation like that,” he confessed.

Going out with a bang

After witnessing a psychological freefall from the thugs that could only be described as delicious, Batman tossed down a smokebomb and sailed up onto – what else – a series of overhanging gargoyle statues. The thugs, however, quickly took hostages, which made the situation a bit more dicey. Interestingly, Batman himself immediately began plotting out a course of action, saying things like “I should approach that one behind.” And then, with that crisis easily averted, our demonstrator moved on to confront the Joker.

Surprise! The Joker wasn’t actually up in the sniper tower at all. Instead: bombs. “That,” said our demonstrator, “is why we’ve given Batman a brand new move called jumping out the window.” End of demo. In a way, however, the whole situation exemplified Rocksteady’s new approach to boss fights – some of which don’t even have physical components at all.

“First and foremost, we’re listening to the fans of Arkham Asylum. Any criticisms that came out of that game we take really, really seriously because we want to really deliver a complete experience. And boss fights in Arkham Asylum came on pretty late in development, so they didn’t receive the sort of attention that they really deserved,” Ginn said.

“But we’re also looking at the different ways that various characters will challenge Batman. So it’s not just about being big and brutish and having this physical confrontation. A character like Riddler is much more about the intellectual battleground between himself and Batman – which is different from the way Batman would take on a villain like Two-Face or Joker. You know, we’re asking ourselves what’s really the best way to maximize the impact of these incredible characters that we have and designing encounters that play to their strengths.”

Speaking of the Riddler…

Yep. He’s back. After the demo concluded, we were treated to a short trailer of the cerebral baddie’s triumphant return. This time, though, he’s done playing around. According to our demonstrator, he’ll be “physically threatening Batman and innocents,” which became quite evident when the trailer showed him preparing to execute a woman he’d taken captive. It was unsettling, to say the least. “You will know that the Riddler is better than you,” he growled as the trailer came to a close.

Despite working with some pretty dark subject matter, however, Ginn closed out our session with a sunny display of optimism.

“I think there’s definitely a focus on quality like there never really has been before,” he said. “And that goes across the board – not just in terms of software, but in hardware itself. I think consumers are becoming very aware of what’s good and what’s not, and they’re voting with their wallets. So it’s great to see that – when you take a lot of risks and create a game you really love and believe in – a lot of gamers respond positively to that. So I don’t have any complaints about the industry at the moment, because it really plays to our strengths.” 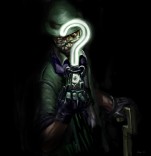