Get all the news from the EA TGS press conference after the break, including first details on the Suda51-Mikami horror title, Shadows of the Damned, a new look at Alice and more. 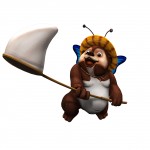