Telltale sent over some art and a screenshot from the second episode of Sam & Max: The Devil’s Playhouse – The Tomb of Sammun-Mak.

Get ’em below the break.

Not much is known about the episode yet, but it looks like wherever it is that the duo are heading, they’ll get there by dressing as upper class citizens and taking the Disorient Express to the Tomb of Sammun-Mak.

Apparently, there’s a villain by the name of the Toy Tycoon heading that wa too, and all are after an artifact called The Devil’s Toybox – which should make the journey a bit more interesting.

No word yet on when Episode Two will be released, but it’s expected sometime this month.

Meanwhile, you can get Episode One: The Penal Zone,  through PSN, PC and Mac. 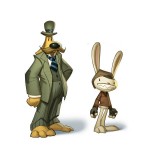